Texting While Driving is on the Increase 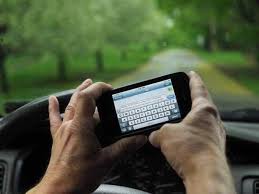 Texting while driving has been an issue for sometime and you usually associate it with younger drivers, but I see a lotof older drivers with their phone in their hand and not paying to their surroundings when I am driving down the road. A study done by State Farm that states there has been a major increase in these behavior with drivers over 30 years of age.

Here are some of their findings:

Even with the increase in hands-free phone devices and blue tooth in vehicles, our phones and more devices such as tablets and they do more all the time, Internet, twitter, emails, messengers, and I am sure there is somethings I don’t know or have.
If you are driving put down it down and drive safe, only takes a second to hurt you, your family, or others. It is not worth taking the chance of altering your life in such a negative way.